Wild: From Lost to Found on the Pacific Crest Trail

I'm relatively new to Cheryl Strayed as an author. I read Tiny Beautiful Things  and liked it, but didn't love it. Perhaps it was the style of the book (all in letters) that didn't work for me. However, a friend and fellow blogger Christina at The Wordy Rose has been raving about how fantastic Wild is for months --and now that I've read it, I completely understand why. It quickly made its way to my list of favorite books!!

When Strayed was 22, her life fell apart. She lost her mother to cancer. Because of the grief, her family was torn apart.  To make it worse, she went through a divorce. Four years later, she made an impulsive decision to hike a portion of the Pacific Crest Trail  (PCT) from the Mojave Desert in California to the Oregon/Washington border all by herself.  Though she had no experience as a hiker, she made the decision to go on the trip in order to put her life back together. The book details her journey from start to finish.

I read this book in less than four days.  It sucked me in immediately. As someone who has lost a parent, I completely related to the first part of the book, where she described her mother's death. The feelings, emotions and reactions she had were not unlike my own. Because of that, I was drawn into the book from the beginning.  Though I'm not a backpacker or hiker, I do love camping and the outdoors, and thoroughly enjoyed her detailed description of her trip. She vividly describes every aspect of her trip from her injuries to her triumphs.

What struck me most about this book was her brutal honesty. I don't think I've ever read a memoir that struck me as so honest and vulnerable. She conveys her thoughts, feelings and experiences eloquently in this book, no matter how personal, embarrassing or crazy they might be. Taking on a backpacking trip of that magnitude by yourself is absolutely amazing to me. I applaud her courage and strength.

The only negative I can think of is that I wanted more about her time spent in Oregon, but I think that's a selfish complaint due to the fact I'm an Oregonian! This book left me eager for more--more of her writing, more about hiking and backpacking, and more about the PCT.

Despite living in Oregon my whole life, I knew very little about the Pacific Crest Trail. I've been to most of the places in Oregon it crosses through but was not aware of the trail itself! Strayed mentions stopping to eat at Elk Lake in Oregon--a place I've been camping many times.  For those who are also unfamiliar, the PCT stretches 2,650 miles from Mexico to Canada--all through the peaks of the mountain ranges. According to their website, 2,964 people have completed the full 2,650 mile trail!
There is a really nice photo gallery on their website as well. Definitely worth checking out!  The more I read about the PCT, the more I want to take up hiking! Even a super short portion of the trail would be awesome.

You won't regret reading this book--it's one of the best books I've read in a very long time!

In honor of the PCT and hiking, here's a photo of me taken at Lava Lake (right down the road from  Elk Lake, where Strayed was on the PCT) in Central Oregon! 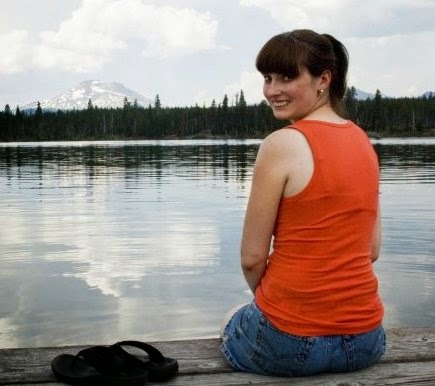 Overall rating for "Wild": A