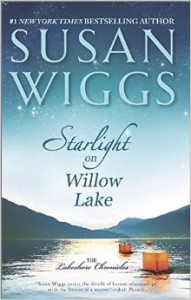 When caregiver Faith McCallum arrives at the enchanted, lakeside estate of Avalon's renowned Bellamy family, she's intent on rebuilding her shattered life and giving her two daughters a chance at a better future. But she faces a formidable challenge in the form of her stubborn and difficult new employer, Alice Bellamy. While Faith proves a worthy match for her sharp-tongued client, she often finds herself at a loss for words in the presence of Mason Bellamy—Alice's charismatic son, who clearly longs to escape the family mansion and return to his fast-paced, exciting life in Manhattan…and his beautiful, jet-setting fiancée.

The last place Mason wants to be is a remote town in the Catskills, far from his life in the city, and Faith McCallum is supposed to be the key to his escape. Hiring the gentle-hearted yet strong-willed caregiver as a live-in nurse gives his mother companionship and Mason the freedom to return to his no-attachments routine. For Faith, it means stability for her daughters and a much-needed new home. When Faith makes a chilling discovery about Alice's accident, Mason is forced to reconsider his desire to keep everyone, including his mother, at a distance. Now he finds himself wondering if the supercharged life he's created for himself is what he truly wants…and whether exploring his past might lead to a new life—and lasting love—on the tranquil shores of Willow Lake.


Faith kept her crumpled-up jacket pressed against the spurting artery. She glanced across the ditch at the van, parked half on and half off the road. “Hurry, Cara,” she said through gritted teeth. “Hurry.” Faith didn’t know how much longer she could last like this.


“How you doing, honey?” she called to Ruby. She couldn’t see the little girl, but had ordered her to stay in the van, several yards away. There was so much blood. Oceans of it. Not to mention an apparent impalement in the lower thigh. Even Faith, with her medical training, was freaking out.


“Cara went to get help,” Faith said, injecting into her voice a confidence she didn’t actually feel.


“Yep. She set a school record in the four hundred.”


Ruby would know. Despite her complaints, she idolized her sister. Faith wished Cara could have driven for help, but Cara couldn’t drive. The van had a stick shift and was a clunker even for an experienced driver.


The mobile phone—the only one they had—didn’t work. The battery was dead or they had run out of minutes on their pay-as-you-go plan; it was always something with that piece of garbage. Fortunately, the Bellamy place, where they’d been headed for Faith’s job interview, was just around a bend in the road.


Only moments ago, they’d been full of hope, spying the house in the distance. There was a long, winding private road leading to a stone-and-timber mansion, which crowned a green knoll overlooking the lake. By cutting across a broad, empty meadow from the road, Cara had probably managed to get there in a matter of minutes.


Now Faith wondered if such a fancy-looking place was surrounded by security fencing or protected by slavering guard dogs. Cara was resourceful, though. And, unlike her sister, fearless. It would take more than a slavering guard dog to intimidate Cara.


The wadded-up jacket Faith was holding on the wound had nearly soaked through. Damn. “Ruby, honey, I need a favor. Can you find a towel or something in the van? Something I can use as a really big bandage.”


“Look anyway.” Faith gritted her teeth. How had she ended up in a mess like this? She had used her own jacket to staunch the blood. So much for her best outfit for the job interview. But oh, well.


An involuntary spasm caused the victim’s back to arch and contort.


“Easy,” Faith said to the stranger, even though he appeared to be unconscious. “You don’t want to move. Trust me, you don’t.” She eyed the piece of metal in his thigh with concern. If it cut the femoral artery, he could die in minutes.


The victim was lucky she’d come across him, probably seconds after the crash. The lakeshore road was deserted, and his motorcycle had ended up deep in a ditch. If she and the girls hadn’t happened by, he would have bled out by now.


It had been Cara, jiggling her leg and watching out the window, who had spotted a flurry of dust and exhaust in the ditch. Her yell—Mom, pull over, I mean it, Mom, pull over right now—had been delivered with an urgent imperative Faith hadn’t questioned. She and Cara had their differences, but the girl wasn’t one to cry wolf.


Ruby appeared at the edge of the ditch. “I brought you my bathrobe.” A gasp escaped her. “Mommy—”


“It looks like a mess, but we need to help this man,” Faith said. She could see Ruby starting to sway. “Don’t pass out on me, kiddo. I can only handle one crisis at a time. Just toss me the robe and go back to the van and wait for me, okay?”


Ruby didn’t hesitate. She threw the wadded-up robe to Faith and rushed to the van. Faith pressed the freshly laundered fabric on top of the soaked jacket. The hot, coppery scent of his blood filled her senses.


Where the hell were the EMTs?


As crucial moments ticked by, Faith did her best to assess the injuries of the unknown victim. She’d checked his airway immediately—all clear, though he was unconscious, and then wrapped her jacket around the big bleed from the arm—the bright rose-red of arterial blood, pulsing out in spurts. In addition to the metal protruding from his thigh, he almost certainly had a compound fracture of the lower leg. A bloody bone, like a branch of stained and broken driftwood, was poking through the torn denim of his jeans.


There were probably other issues, as well, but she couldn’t let up on the bleeding in order to examine him in detail. She yearned to stabilize the piece of metal, but that was too risky. He was male, in his forties or fifties, perhaps, judging by the face framed by the now-battered helmet. He seemed to be about six feet tall, two hundred pounds. It was probably best he was unconscious because that fracture was one of the most painful looking things she’d ever seen.


Her mind, trained by instinct, flashed again to Ruby, who had obediently returned to the van. What time was it? When your kid was diabetic, you always needed to know what time it was. When did she last eat? When did she have her insulin? Were her levels okay?


“Ruby, I want you to speak up if your alarm even thinks of going off.”


The blood-smeared face of Faith’s discount-store watch showed nine-twenty. It was past time for the job interview.


Ah, well, the position had sounded too good to be true, anyway. The invitation that had popped up in her inbox late last night had been an interview with a Mrs. Alice Bellamy, who lived in a fully staffed estate on the western shore of Willow Lake. Finding a client who could accommodate Faith and her two girls was a longshot, but Faith had run out of options.


After what seemed like an eternity, she heard the crunch of tires on gravel. No sirens, but at this point she would take whatever help she could get.


She glanced up and saw a shiny dark blue car that was eerily silent in its approach. One of those new electric things that made no noise. The door opened and a guy in a crisply pressed three-piece suit with a white shirt and tie jumped out and rushed toward her.


She could tell the moment he spotted the victim, because his gasp was audible. He looked a bit like Ruby had, regarding the sea of blood.


“Hey, get a grip,” she said. As she spoke, the victim made an involuntary spasm. She really needed to check his pulse. “I could use some help here.”


“Okay. What do you need me to do?” She could feel his gaze moving over the blood that covered her.


“He’s bleeding from the brachial artery. That’s why there’s so much blood. We have to keep applying pressure. This robe I used is soaked through already,” she said. 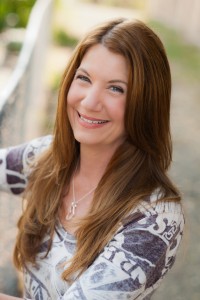 “Then should I… Okay.” She could see his shadow on the road as he removed his jacket and bent down beside her. “Now what?”


“I need you to keep compression right here.” She could barely see her own hands.


“I’m ready,” he said.
About the Susan Wiggs:
Susan Wiggs is the author of many beloved bestsellers, including the popular Lakeshore Chronicles series. She has won many awards for her work, including a RITA® Award from the Romance Writers of America.
Website
Facebook
Twitter