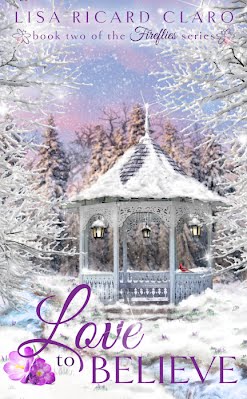 A woman in a man’s world...
CPA Rebecca Walker wields a hammer and saw with skill, but it’s like fighting tooth and nail to prove to her chauvinistic father that she’s capable of managing the family construction business. Romance is a luxury Rebecca can’t afford.
A man with secrets...
Thanks to his past, romance isn’t in Sean Kinkaid’s future, so when Rebecca proposes ‘friends with benefits,’ Sean agrees. It’s the perfect scenario until love sneaks in—and Sean’s secrets tear them apart.
Believe...
But Rebecca has a secret too, one she fears Sean will never accept. It will take intervention from an unlikely source to convince these two lovers they have the one thing neither of them ever expected to find ... a love to believe.

“Sean?”
Rebecca’s voice poleaxed him and a powerful wave of awareness washed over him, several things manifesting at once: She had the power to slay him with a single word, she sounded shaken and scared, and this must be serious because she hadn’t initiated contact with him even once since their split. A quick flash of their brief, but passionate, coming together at the gazebo stabbed into his gut, as did her statement before she retreated. ‘I can’t do this,’ she’d said, and he assumed she meant she couldn’t cheat on Nate. Which didn’t negate the fact that she’d been as involved in the kiss as Sean had been, but, he reminded himself for the thousandth time, just because he and Rebecca shared history and a powerful physical attraction didn’t mean that Nate hadn’t managed to win her heart, or at the very least, her loyalty. In either case, she didn’t belong to Sean. He needed to remember that.
“Sean? Are you there?”
“You sound upset.” He heard sirens through the phone and his heart damn near stopped beating as icy fear sluiced over him. “Are you okay? Have you been in an accident?”
“No, but I need you, Sean.”
His heart started pumping again and relief flooded through him. “Where are you, sweetheart? I’ll be right there.”
“No, no. Its—I need you, but I’m not asking—I need a lawyer, Sean. I’m about to be arrested.”
Comprehension doused him like an unexpected cold shower. She didn’t need him, she needed his legal expertise. Ouch.
He pinched the bridge of his nose. “Arrested for what?”
“Resisting arrest and assaulting a police officer.”
A surprised laugh escaped him. “Are you serious?”
“Can I count on you or not?”
“Jesus, yes. Of course. Are you still at the scene of the…uh…crime?”

Lisa Ricard Claro is an editor, award-winning author, and Pushcart Prize nominee with published articles and stories spanning multiple media. She resides in Georgia with her husband of more than three decades and counting, is mother to three (a ruggedly handsome son and two stunningly beautiful daughters--Lisa might be a little biased), and dreams of one day living at the beach. Seriously dreams of it. As in, she's already decorating her dream beach house. In addition to an array of sand dollars and seashells, she keeps a framed sign hanging in her office: "Sandy Toes and Salty Kisses Welcome Here."

Lisa is also a lover of dogs and cats, and has a heart for rescues. This is why you will find a rescued pet companion in every one of her books. Sometimes they are part of the story line (Pirate the dog, in "Love Built to Last"), and sometimes they're already ensconced in their forever home with one of Lisa's characters (Pavarotti the cat, in "Love to Win"). As you read Lisa's books, watch for the rescues!

While Lisa is a fan of storytelling in all genres, Romance is her favorite because she believes everyone deserves love and a happily-ever-after. But she adores a little mystery now and then, too, so keep an eye out for Lisa's authorship of a whodunit one of these days soon.

on February 11, 2016
Email ThisBlogThis!Share to TwitterShare to FacebookShare to Pinterest
Labels: RABT