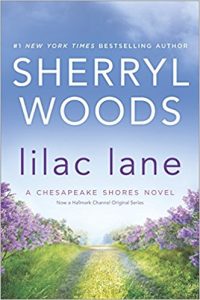 No one writes about friends, family and home better than Sherryl Woods. Told with warmth and humor, Lilac Lane is a brand-new story in her beloved Chesapeake Shores series, one readers all over the world have waited two years to read!
At the heart of Lilac Lane is Keira Malone, who raised her three children alone after her first marriage broke apart, and who, after years of guarding her heart, finally finds love again. But that love is short-lived when her fiancé suffers a fatal heart attack. Grieving and unsure of what’s next, Keira agrees to move from Dublin to Chesapeake Shores, Maryland, to spend time with her daughter, Moira, and her new granddaughter, Kate, as well as to help her son-in-law, Luke, with his Irish pub, O’Briens.
Not wanting to live underfoot, she rents a charming cottage on Lilac Lane, replete with views of the ocean and her neighbor’s thriving garden—not to mention views of the neighbor himself. The neighbor is none other than Bryan Laramie, the brusque and moody chef at the pub, with whom Keira is constantly butting heads. But things get real when Bryan’s long-lost daughter, whom he hasn’t seen since she was a baby, shows up out of the blue. As Bryan and Keira each delve into their pasts, reopening wounds, the rest of the town is gearing up for the Fall Festival Irish Stew cook-off, and making no bones about whose side they’re on. It’s Kitchen Wars meets This is Your Life—a recipe for disaster…or a new take on love?
You won’t want to miss this epic return to Chesapeake Shores, a place we’re betting you’ll want to stay forever.


It was well past six when Kiera and Moira left the spa and headed straight for O’Brien’s for something to eat. Kiera had a hunch Moira was more excited about showing off her mother’s makeover than she was about her own.
Kiera still wasn’t used to the image she saw when she looked into the mirror. She looked ten years younger. That’s what the hairstylist had told her about the shorter cut, and Moira had agreed. Kiera wasn’t sure about ten years, but she did feel lighter and more feminine somehow. And not all of the color in her cheeks was due to the blush they’d applied at the salon. She felt surprisingly good about her new look, though oddly uneasy about showing it off at the pub.
When her daughter held open the door for her at O’Brien’s, Kiera hesitated ever so slightly.
“Mum, what are you afraid of? You look amazing.”
“I don’t feel like myself at all. At my age, there’s no need for this sort of nonsense.”
“At your age?” Moira mocked. “You’re far from over the hill. Pretty polish on your nails, skin that glows and a hair­cut that frames your face is not unnecessary nonsense. Every woman deserves to feel beautiful, whatever her age. As soon as we’re inside, I’m going to get my camera out of Luke’s of­fice and take some pictures, so you can see yourself as I do.”
“The last thing I want is a fuss. I don’t want to be the cen­ter of attention,” Kiera said nervously.
Moira sighed. “Will you please just come inside and gra­ciously accept all of the compliments that I know are going to come your way?” “Is that supposed to make me less nervous?” Kiera grum­bled, but she did walk into the pub, relieved to see that it was busy enough that she might not even be noticed. Of course, that didn’t take into account that Mick and Megan were seated at the bar, as they often were, along with Luke’s parents, Jeff and Jo O’Brien.
It was Megan who caught sight of her first.
“Oh my, look at you,” she said, coming over to clasp Ki­era’s icy hands. “You look fabulous, Kiera.” She turned to the rest of the family. “Doesn’t she?”
“I would hardly have recognized you,” Mick said. “I like the new hairstyle. It becomes you.”
Jo beamed. “I need someone to take me in hand, as Moira did for you. I haven’t had a makeover in years and I am in sad need of one. Being on the athletic field at the high school all day long wreaks havoc with my skin and my hair. Kiera, you’re putting all of the O’Brien women to shame with this new look of yours.” She grinned at Megan. “Well, perhaps not her. Megan has always been stylish from head to toe.”
“It’s those trips to Paris I insist Mick take me on,” Megan replied. “I sit in cafés and observe what the French women are wearing, then adapt it for Chesapeake Shores. I think I’ve learned to knot scarves in at least twenty different ways.”
“And I always thought there was only one way,” Jo said ruefully.
Kiera was happy to have their attention diverted from her for the moment and fascinated by the teasing between the sisters-in-law. It continued to astonish her how well the O’Briens meshed as a family, despite differences in styles, opinions and personalities.
Luke beckoned Kiera over to the bar. “I need a closer look at this transformation,” he said. “Is this the same woman I saw polishing my bar just last night?”
“Okay, okay,” Kiera said, laughing at last. “I’m flattered by all the attention, but I wouldn’t mind a pint of ale right about now. Is the service in here falling apart without me on the job?”
“Happy to oblige,” Luke said at once. “And what about some dinner? You and Moira must be starved after your long day. The special tonight is shepherd’s pie.”
One of my favorites, Kiera thought to herself. She couldn’t help wondering if Bryan had the knack for it, since it hadn’t been on the menu since her arrival.
“You stay right here,” she told Luke. “I’ll get plates for myself and Moira.”
Before he could stop her, she walked around the bar and en­tered the kitchen. “Two shepherd pie dinners,” she called out.
Bryan’s head swiveled so quickly in her direction, she was surprised it didn’t make him dizzy. Then his mouth gaped in a most startling and complimentary way.
“Kiera?” he said, his voice oddly choked.
“Yes. Who else would be barging into the kitchen like this?”
His gaze narrowed. “You look different.”
“After the money Moira spent today, I would hope so,” she said tartly, then gave him a hesitant look. “Is it a good difference?”
His lips curved slightly at the apparent hint of insecurity in her voice. “You look softer, more approachable,” he said, though he sounded as if that was more troublesome than it should have been.
“Ten years younger, that’s what the stylist claimed,” she said. “Of course, she wanted to be sure of a tip.”
“I don’t know about that,” Bryan said. “You looked fine before.” He seemed to be fumbling for words. “But don’t all women want to look younger?”
Kiera studied him curiously. There was something oddly charming about his obvious nervousness. Usually he was brusque to the point of rudeness. If there was something about her look tonight, there was also something very differ­ent in Bryan’s reaction to her. She wished she could put her finger on it, but perhaps it was better that she couldn’t put a name to it. That might shift the nervousness straight to her.

With her roots firmly planted in the South, Sherryl Woods has written many of her more than 100 books in that distinctive setting, whether in her home state of Virginia, her adopted state, Florida, or her much-adored South Carolina. Sherryl is best known for her ability to creating endearing small town communities and families. She is the New York Times and USA Today bestselling author of over 75 romances for Silhouette Desire and Special Edition.

To follow the full tour, click here. Look for my review on the review tour November 6th!