As I've mentioned in earlier posts, I'm participating in #theunreadshelfproject2020 hosted by Whitney @ The Unread Shelf.  January's challenge is to pick a book, any book off of your unread shelf and read it by January 31st. My pick,(thanks to several of you chiming in on Instagram!) is Homegoing by Yaa Gyasi. It's been on my bookshelf for quite awhile, and I finally started it Wednesday night! Here are the opening lines:

"The night Effia Otcher was born into the musky heat of Fanteland,a fire raged through the woods just outside her father's compound. It moved quickly, tearing a path for days."

I'm really enjoying this book so far and thankful I joined the Unread Shelf Project to motivate me to read it! In case you haven't read it, here is the synopsis, from Goodreads: 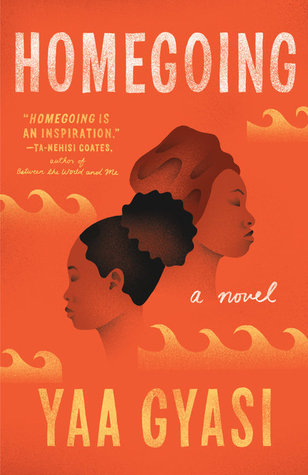 Two half-sisters, Effia and Esi, are born into different villages in eighteenth-century Ghana. Effia is married off to an Englishman and lives in comfort in the palatial rooms of Cape Coast Castle. Unbeknownst to Effia, her sister, Esi, is imprisoned beneath her in the castle's dungeons, sold with thousands of others into the Gold Coast's booming slave trade, and shipped off to America, where her children and grandchildren will be raised in slavery. One thread of Homegoing follows Effia's descendants through centuries of warfare in Ghana, as the Fante and Asante nations wrestle with the slave trade and British colonization. The other thread follows Esi and her children into America. From the plantations of the South to the Civil War and the Great Migration, from the coal mines of Pratt City, Alabama, to the jazz clubs and dope houses of twentieth-century Harlem, right up through the present day, Homegoing makes history visceral, and captures, with singular and stunning immediacy, how the memory of captivity came to be inscribed in the soul of a nation.

Have you read Homegoing? What did you think? Happy Friday!
book beginnings book blog