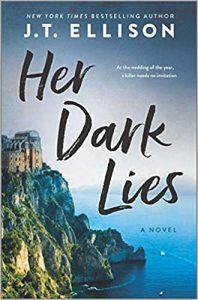 About Her Dark Lies: A Novel

Fast-paced and brilliantly unpredictable, J.T. Ellison’s breathtaking new novel invites you to a wedding none will forget—and some won’t survive.

Jutting from sparkling turquoise waters off the Italian coast, Isle Isola is an idyllic setting for a wedding. In the majestic cliff-top villa owned by the wealthy Compton family, up-and-coming artist Claire Hunter will marry handsome, charming Jack Compton, surrounded by close family, intimate friends…and a host of dark secrets.

From the moment Claire sets foot on the island, something seems amiss. Skeletal remains have just been found. There are other, newer disturbances, too. Menacing texts. A ruined wedding dress. And one troubling shadow hanging over Claire’s otherwise blissful relationship—the strange mystery surrounding Jack’s first wife.

Then a raging storm descends, the power goes out—and the real terror begins…

The crew begins to shout, and Jack appears back at my side. “We’re putting in. The radar looks nasty, the first of the storms is coming in faster than they were expecting. I hope the hydro­foil is right behind us. They might have some trouble if they haven’t launched yet.”

“What did the Crows want?”

“Malcolm and Gideon,” he corrects automatically. “You have to stop calling them that, darling. Especially now. They were just running me through the new schedule. Mom called, she thought it might be wise to move everything up a day. The storm will blow through during the night and day tomorrow, then there will be a break in the weather. So, the rehearsal din­ner will be Thursday night instead of Friday, and the wedding Friday instead of Saturday. Is that okay?”

I fight back the urge to snap—Are you kidding me? We’ve had this schedule laid out for months. What if the guests don’t get here on time?

But the girl who’s marrying Jack isn’t the type to get fussed over something so insignificant as a schedule change. No bridezil­las here. Ana and Brice are funding most everything for the wed­ding anyway, and with Henna planning everything, I’m just along for the ride. My only goal is Jack’s—our—eternal hap­piness.

“No problem. With everyone here I suppose it doesn’t really matter when things happen. If Henna’s cool with it, so am I.”

“Good. Thanks for being so understanding. Now the only issue is getting the ferry here before the worst of the storm hits.” He looks over his shoulder to the open waters as if he can con­jure the hydrofoil. I run a hand along his arm, for once reas­suring him.

“I’m sure they will. I have faith in the Compton magic. Everyone will be here safe and sound before the heavens start to squall.”

“I love you. By the way, someone was watching for us on the cliff. I saw a flash of white, a scarf, I think. Your family must be expecting us.”

Jack’s brows furrow. “No one should be up there now. It’s blocked off for the renovations.”

“You’re sure you saw someone?”

Am I? The flash of white, the sense that a woman had turned and walked away…

“All right. I’ll mention it. We don’t want anyone getting hurt.”

The engines reverse, growling their displeasure. The teak deck shifts beneath our feet, and I grab onto the railing for extra bal­ance. The island looms ahead, its lush, forested hills gleaming, the massive cliffside disappearing from view as the boat comes around. The sun catches my ring, making it flash and sparkle.

I breathe in the sea air, taking a moment to revel in the warm sun, the shrieks of the gulls, the calls of the crew, the strong arms folded across the rail next to mine. The incessant whapping of a helicopter’s rotors bleeds through the bucolic seascape. Jack’s father and brother, beating the storm.

“It’s all going to be fine,” Jack says again, sensing my need for reassurance. The past forty-eight hours have been off the charts nerve-racking.

Many marriages are made on such little lies. It’s so much eas­ier to reassure than laying oneself bare. Saying I am terrified is unthinkable. All of this—the break-in, the trip, the island, the wedding, the storms—it is too much for me to bear. And yet, I smile winningly at my fiancé, squeeze his hand. He mustn’t know I’m second-guessing everything. He would take it the wrong way.

I look toward the pier. A knot of people comes into focus, and there is the small strobing of a blue light. Alarm seizes my stomach. 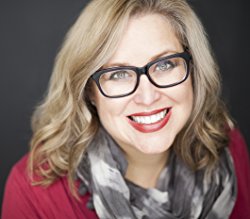