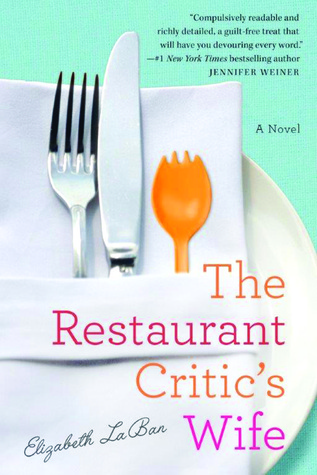 Note: I received this book fromNetGalley to facilitate my review. I received no other compensation, and all opinions are my own.

From Goodreads:
Lila Soto has a master’s degree that’s gathering dust, a work-obsessed husband, two kids, and lots of questions about how exactly she ended up here.

In their new city of Philadelphia, Lila’s husband, Sam, takes his job as a restaurant critic a little too seriously. To protect his professional credibility, he’s determined to remain anonymous. Soon his preoccupation with anonymity takes over their lives as he tries to limit the family’s contact with anyone who might have ties to the foodie world. Meanwhile, Lila craves adult conversation and some relief from the constraints of her homemaker role. With her patience wearing thin, she begins to question everything: her decision to get pregnant again, her break from her career, her marriage—even if leaving her ex-boyfriend was the right thing to do. As Sam becomes more and more fixated on keeping his identity secret, Lila begins to wonder if her own identity has completely disappeared—and what it will take to get it back.
My Review:
When I first heard of this book, I knew I had to read it, but once I started it, it turned out to be completely different than I expected. I even almost quit reading it. But I kept going, and I'm glad I did! At first I had trouble connecting with Lila. I felt like the whole fir part of the book was  so focused on Why It's Hard To Be A Mother of Two. While I completely agree (though I can't relate) with her struggle, it just wasn't what I was expecting from the book and it threw me off.
I was SO frustrated with Sam as a character throughout the majority of this book. I can understand why a restaurant critic would want to conceal his identity, but his efforts were so extreme.  This is the area where I started to connect with Lila later in the book. She fought to keep her own identity and I liked the second half of the book much more than the first.
While not what I expected, this book was still definitely worth the read!
Overall rating for "The Restaurant Critic's Wife": 3.5 stars
Happy Reading!
book review