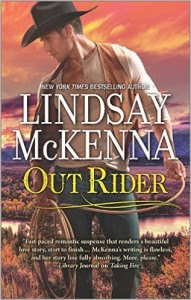 Mass Market Paperback: 368 pages
Publisher: HQN Books (April 26, 2016)
With her return to Jackson Hole, Wyoming, New York Times bestselling author Lindsay McKenna shows how love can find a way out of the darkness…
A fresh start—that’s all Devorah McGuire wants. As a former Marine and current Ranger with the US Forest Service, she’s grown accustomed to keeping others safe. But when the unthinkable happens, she can only hope that a transfer to Jackson Hole, Wyoming, will allow her to put the past behind her for good.
Dev’s mentor at Grand Tetons National Park is fellow canine handler and horseman Sloan Rankin. He shows Dev the spectacular trails, never knowing the terror that stalks her every move. Despite her lingering fear, Dev feels an attraction for Sloan as wild as their surroundings.
With Sloan, Dev can envision a new life—a real home. Unless a vengeful man fresh out of prison succeeds in finishing what he started…

Dev was good at putting on a game face, Sloan realized. Around him, she was letting down, being more herself, maybe trusting him a little. His palm fell across his slow beating heart as he thought about her in sexual terms. Yes, he wanted her. In every possible way. He wanted to feel how soft and lush her mouth blossomed beneath his would feel. To hear the softened sounds catching in her slender throat as he pleasured her. Something told him Dev was a woman who enjoyed and luxuriated in her sensuality. She would be hot, assertive and enjoy sex just as much as he did. Sloan would bet his life on it.

A bit of guilt ate at him because although he was sexually drawn to Dev, he also appreciated her on so many other equally important levels. Sloan liked the way she saw the world. Liked her innate gentleness and that soft, husky voice of hers. He could see her confidence clearly, but with him, she allowed him to see a little of who she was beneath it and that thrilled him as little else had in a long, long time. He wondered about her life. Had she ever been married? Divorced? He had a hundred questions for her and didn’t have an answer for any of them. Maybe tomorrow, if it felt right, and she was relaxed, he’d asked. More important, now that Sloan realized the pressures on Dev, he was going to make damn sure he didn’t trod like a bull on the rampage, into her life. Pacing and timing with her was everything…. 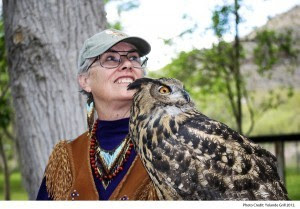 A U.S. Navy veteran, she was a meteorologist while serving her country. She pioneered the military romance in 1993 with Captive of Fate, Silhouette Special edition.  Her heart and focus is on honoring and showing our military men and women.  Creator of the Wyoming Series and Shadow Warriors series for HQN, she writes emotionally and romantically intense suspense stories.