TLC Book Tours Book Blast: They Were Like Family To Me (GIVEAWAY!!) 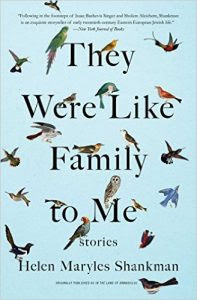 
“An absolutely dazzling triumph…A singularly inventive collection” (Jewish Book Council) of linked stories set in a German-occupied town in Poland during World War II, where tales of myth and folklore meet the real-like monsters of the Nazi invasion.
1942. With the Nazi Party at the height of its monstrous power, Hitler’s SS fires up the new crematorium at Auschwitz and the occupying army empties Poland’s towns and cities of their Jewish citizens. As neighbor turns on neighbor and survival depends on unthinkable choices, Poland has become a moral quagmire, a place of shifting truths and blinding ambiguities.
“Filled with rich attention to the details of flora and fauna and insightful descriptions of the nuances of rural and small-town life” (Pittsburgh Post-Gazette). Helen Maryles Shankman shows us the people of Wlodawa, a remote Polish town at a crossroads: we meet an SS officer dedicated to rescuing the creator of his son’s favorite picture book; a Messiah who announces that he is quitting; a Jewish girl who is hidden by an outspoken anti-Semite—and his talking dog. And walking among these tales are the enigmatic Willy Reinhart, Commandant of the forced labor camp who has grand schemes to protect “his” Jews, and Soroka, the Jewish saddlemaker and his family, struggling to survive.
“Moving and unsettling…Like Joyce’s Dubliners, this book circles the same streets and encounters the same people as it depicts the horrors of Germany’s invasion of Poland through the microcosm of one village….A deeply humane demonstration of wringing art from catastrophe” (Kirkus Reviews), They Were Like Family to Me (originally called In the Land of Armadillos) is a testament to the persistence of humanity in the most inhuman conditions.
. 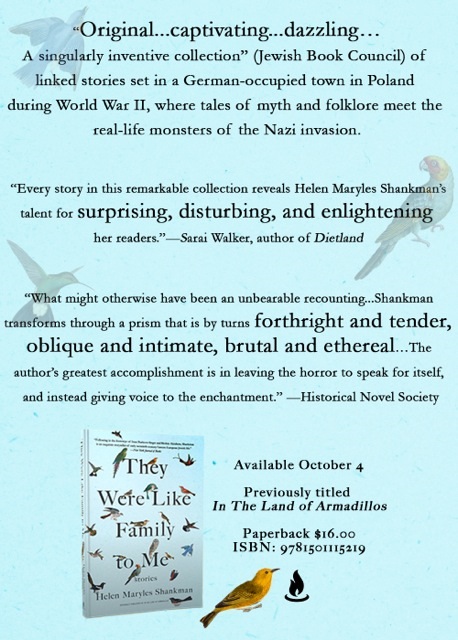 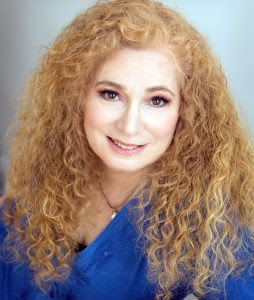 Helen Maryles Shankman’s stories have been nominated for two Pushcart Prizes. She was a finalist in Narrative Magazine’s Story Contest and earned an Honorable Mention in Glimmer Train’s Short Story Award for New Writers competition. Her stories have appeared in The Kenyon Review, Gargoyle, Cream City Review, 2 Bridges Review, Grift, Jewishfiction.net, and other publications. She is the author of the critically acclaimed novel The Color of Light and the story collection They Were Like Family to Me. She lives in New Jersey, with her husband and four children.