Showing posts from December, 2017
Show all

This is a weekly meme hosted by Kathryn @  The  Book Date .   Things have been crazy and I haven't gotten a Monday post up in a couple weeks! Oh, December craziness! Here's what I've been up to, reading wise.   The blog will probably be a little quiet these next couple weeks so I can enjoy having a break for a little while but I will come back strong with Bout of Books in January! Today is my last working Monday of 2017 and I am thrilled! I have December 22-January 1 off work and I am so excited!     Recently Finished     Really enjoyed this one!! Find my review here .     Currently Reading     This is Book #3 in the Mischief Bay series--I'm reviewing Book #4 for TLC Book Tours on February 7th, with an excerpt post on January 16th!   Up Next     Book #4 in Mischief Bay series!   These are also on my radar for the break! Both have review posts with TLC Book Tours coming up in early 2018!!       Happy R
Post a Comment
Read more

Blog Tour and Review: The Wife Between Us

Title: The Wife Between Us Authors:  Greer Hendricks  and   Sarah Pekkanen Release Date: January 9, 2018 Pre-Order this book today!﻿ Note: I received this book from  NetGalley   t o facilitate my review. I received no other compensation, and all opinions are my own. From Goodreads: When you read this book, you will make many assumptions. You will assume you are reading about a jealous wife and her obsession with her replacement. You will assume you are reading about a woman about to enter a new marriage with the man she loves. You will assume the first wife was a disaster and that the husband was well rid of her. You will assume you know the motives, the history, the anatomy of the relationships. Assume nothing.   This book keeps you guessing at every twist and turn! When the plot summary says assume nothing, they are right! You spend the first part of the book thinking you understand what's going on and then the next section flips it upside down. Th
Post a Comment
Read more 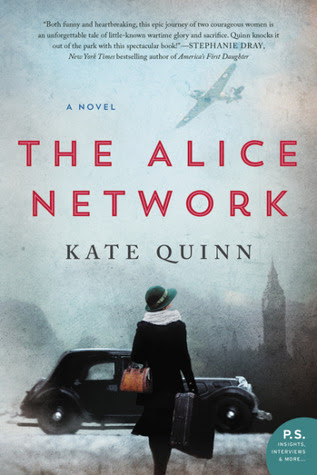 Title: The Alice Network Author: Kate Quinn 503 pages, published June 6, 2017 Source: Borrowed from the  library From Goodreads: 1947. In the chaotic aftermath of World War II, American college girl Charlie St. Clair is pregnant, unmarried, and on the verge of being thrown out of her very proper family. She's also nursing a desperate hope that her beloved cousin Rose, who disappeared in Nazi-occupied France during the war, might still be alive. So when Charlie's parents banish her to Europe to have her "little problem" taken care of, Charlie breaks free and heads to London, determined to find out what happened to the cousin she loves like a sister. 1915. A year into the Great War, Eve Gardiner burns to join the fight against the Germans and unexpectedly gets her chance when she's recruited to work as a spy. Sent into enemy-occupied France, she's trained by the mesmerizing Lili, the "Queen of Spies", who manages a vast network of secret agents
1 comment
Read more 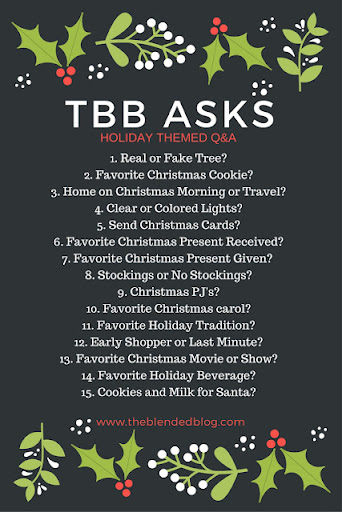 I saw this The Blended Blog Asks post on Brandie @ Running on Words and Wine 's blog...looked fun! Real or Fake Tree? – Though I love real trees, we have an artificial one because...allergies. Favorite Christmas Cookie? – I do love classic chocolate chip! Or those peanut butter ones with the Hershey kiss in the middle. I hate baking but love cookies! Home on Christmas Morning or Travel? –We usually go over to Isaac's mom's house (20 minute drive) but this year we're hosting at our house! Clear or Colored Lights? – I like both put I prefer clear on my tree! Send Christmas Cards? – No...I did the first couple years we were married but haven't since. Favorite Christmas Present Received? – My ice skates when I was young, and my engagement ring from Isaac in 2005 :) Favorite Christmas Present Given? – That's a tough one because they're all fun! I love watching people open presents I surprise them with. Stockings or No Stockings? – Isaac's
1 comment
Read more

My Week: A five day workweek after 5 days off is rough. It was super busy at work, and we had an event on Friday. You know how I survived the week? Yoga. And coffee.  This weekend I started my Christmas shopping, or at least getting organized for it so I'm not leaving it all until the last minute. I do most of my shopping on line, as I can't stand shopping with huge crowds. We went to the mall on Saturday night and it was absolutely insane and I was like...nope. Thank goodness for Amazon! Reading: I finished The Alice Network!!! Oh my goodness it was so good. I finished it on Friday after work and had a book hangover and couldn't read a thing all weekend. So, so good.  A must read. I will post a full review this week! Next up is The Wife Between Us, for a completely different change of genre!    Workouts: As I said above, yoga helped me survive the week!! Most of my yoga was done at home (other than Tuesday PiYo). I have two favorite ways to practice yoga at home a
1 comment
Read more
More posts