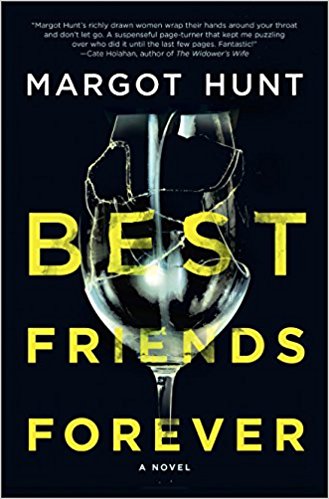 About Best Friends Forever
Hardcover: 336 pages
Publisher: MIRA (January 23, 2018)
Kat Grant and Alice Campbell have a friendship forged in shared confidences and long lunches lubricated by expensive wine. Though they’re very different women—the artsy socialite and the struggling suburbanite—they’re each other’s rocks. But even rocks crumble under pressure. Like when Kat’s financier husband, Howard, plunges to his death from the second-floor balcony of their South Florida mansion.
Howard was a jerk, a drunk, a bully and, police say, a murder victim. The questions begin piling up. Like why Kat has suddenly gone dark: no calls, no texts and no chance her wealthy family will let Alice see her. Why investigators are looking so hard in Alice’s direction. Who stands to get hurt next. And who is the cool liar—the masterful manipulator behind it all.

"I'm curious about something," Sargeant Oliver said. "Why did you think Howard Grant was suicidal? I thought you said youweren't close."
“We weren’t. And I never told you I thought he was sui- cidal. I thought that’s what Detective Demer was suggesting.” “I don’t think he suggested that at all,” Oliver said, fixing her eyes on me. They were dark and f lat, like a shark. I won- dered again why she was being so hostile. Had she met Kat, not liked her and extended her dislike to me? Kat could be charming and funny, but I had also seen her turn suddenly cold and imperious, especially when she was challenged. It
was not hard to imagine Oliver affecting her that way.
“I have a question,” I said. Oliver just stared at me, but Demer nodded, so I addressed him. “You said you were brought in from Tallahassee. Why was that?”
Demer glanced at Oliver. “It’s not uncommon for a small police department not to have any detectives on staff. Some- times when there is a situation that requires a more in-depth investigation, they’ll request a detective on loan.”
“So, I’m not sure how this works. Are you and Oliver partners in this investigation?” I asked. “Or are you in charge, and she’s reporting to you?”
I knew instantly from the sour expression on Oliver’s face that they were not, in fact, partners. Demer was the lead, Oliver his unhappy subordinate.
“I’m taking point on the investigation for the time being,” Demer said mildly. “Let’s go back to your friendship with Katherine Grant. How long have you known each other?”
“Three years.”
“And you’re close friends?” “Yes,” I said. “Very close.”
“How would you describe Katherine Grant?” Demer asked.
It was odd hearing Kat constantly referred to by her full name. She had always been Kat to me.
“How would I describe Kat?” I repeated. How did you dis- till someone you loved down to a few words? “She’s funny. Smart. Thoughtful. Loyal. Generous… Solid.”
“Would you say that Howard and Katherine Grant had a happy marriage?” Demer asked.
I hesitated. The truthful answer would be no, they cer- tainly did not. But I also didn’t see any benefit in telling the police that.
“I don’t think anyone on the outside ever truly knows what goes on inside a marriage,” I said carefully.
Demer smiled patiently. “No, probably not. I’m just ask- ing for any impressions you might have formed from being around them.”
“That’s just it. Whenever I saw the two of them together, well, I was there, wasn’t I? Most married people behave dif- ferently when there are other people around. I know my hus- band and I do.”
It was a nonanswer, but if it frustrated Demer, he hid it well. Oliver, on the other hand, looked like she wanted to slap me. “Fair enough,” Demer said. “Did Katherine ever complain about her husband?”
“Kat,” I corrected him.
“Excuse me?”
“She goes by Kat, not Katherine.”
“Okay. Kat, then. So, did she?”
“Complain about her husband?” I repeated. He nodded. “Sure, from time to time. I hate to break it to you, Detec- tive, but most women complain about their husbands to their friends.”
The wonderful thing about this statement was that it had the benefit of being the absolute truth.
“Let’s get back to Howard Grant,” Demer said.
My patience was starting to fray. “I’ve already told you, I wasn’t close with Howard. I was friends with Kat. I suggest you talk to her if you want to know about her husband.”
“Oh, we’ve already talked to Katherine Grant,” Oliver inserted.
Something about this bald statement caused a f licker of concern at the edges of my consciousness. I wasn’t sure what exactly about it bothered me. Of course, it only made sense that they would interview Kat as part of their investigation, even if she was out of the country at the time of Howard’s death. But then, suddenly, I realized what the problem was. Kat hadn’t told me the police had been to see her. And we told each other everything, or almost everything. I knew when her insomnia was acting up, and when the dry cleaner ruined her favorite dress, and usually what she’d had for dinner the night before. So why didn’t she call to tell me the police had questioned her about her husband’s death? 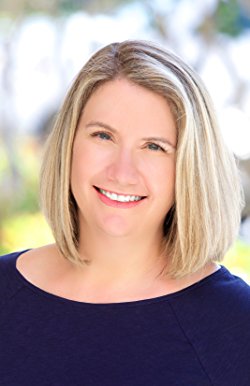 Margot Hunt is the pseudonym of a bestselling writer of twelve previous novels. Her work has been praised by Publisher’s Weekly, Booklist and Kirkus Reviews. BEST FRIENDS FOREVER is her first psychological thriller.