Showing posts from September, 2018
Show all

Hosted by Taking On A World of Words .      The Three Ws are: What are you currently reading?   What did you recently finish reading?   What do you think you’ll read next? I'd been in a reading slump for awhile, and couldn't get into anything! It was such a bummer. But I finished two amazing books this week so things are looking up! Recently Finished I loved The Kiss Quotient!! Stella was such a great character. I flew through the book.  I also stayed up late last night to finish Where the Crawdads Sing, the Reese Witherspoon September pick. It was fantastic! One of my favorites of her 2018 picks. Currently Reading     I started this one right before Where the Crawdads Sing came in for me at the library, so I set it aside. Excited to dive back in because I was hooked right away! Up Next I've heard this one starts out a bit slow, but I've also heard it is amazing! Have you read it? What did y
2 comments
Read more

Top Ten Books by my Favorite Authors I Haven't Read

Top Ten Tuesday is a weekly feature hosted by That Artsy Reader Girl .  This Week's Topic: Books By My Favorite Authors That I Still Haven’t Read       Have you read any of these? Which should I make sure to read? Happy Reading!
3 comments
Read more

TLC Book Tours: When The Lights Go Out (Review) 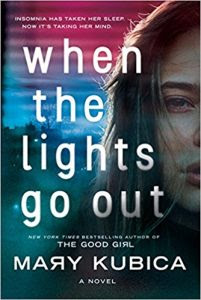 About When the Lights Go Out Hardcover:  336 pages Publisher:  Park Row; Original edition (September 4, 2018) A woman is forced to question her own identity in this riveting and emotionally charged thriller by the blockbuster bestselling author of  The Good Girl , Mary Kubica  Jessie Sloane is on the path to rebuilding her life after years of caring for her ailing mother. She rents a new apartment and applies for college. But when the college informs her that her social security number has raised a red flag, Jessie discovers a shocking detail that causes her to doubt everything she’s ever known. Finding herself suddenly at the center of a bizarre mystery, Jessie tumbles down a rabbit hole, which is only exacerbated by grief and a relentless lack of sleep. As days pass and the insomnia worsens, it plays with Jessie’s mind. Her judgment is blurred, her thoughts are hampered by fatigue. Jessie begins to see things until she can no longer tell the difference between what’s
1 comment
Read more

Top Ten Tuesday is a weekly feature hosted by That Artsy Reader Girl .  This Week's Topic: Books On My Fall 2018 TBR Here's my list! It does include a few ARC's I was lucky to get :)   Have you read any of these? Are any of these on your Fall TBR? Happy Reading!
3 comments
Read more 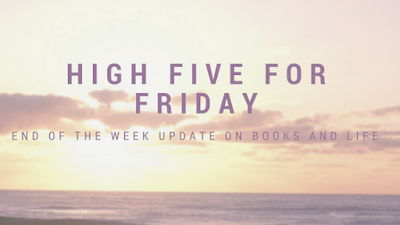 Inspired by Brandie at Running on Words and Wine and Kim at Kimberlyfaye Reads ,I've created my own Friday post!   1. New Books this Week   I just got approved for the new Cathy Lamb book on NetGalley (yay!!) and just downloaded the newly release Christina Lauren book because literally EVERYONE was saying how much they loved it! Excited to read it soon! 2. Books I've Been Loving this Week     Just started this one Wednesday and am enjoying it so far! 3. When I Wasn't Reading   Photo credit Yoga + Beer Surprise, surprise--going to talk about yoga here :)  On Monday, I went to a Yoga + Beer class at Eola Hills Winery --one of the last few outdoor classes of the summer. This one was extra special because we had live music--the incredibly talented Kevin Paris ! It was an absolutely fabulous class! Check out his music on Spotify --it's so relaxing and perfect for yoga. A group of us went and it was one of the best classes of t
1 comment
Read more

Top Ten Tuesday is a weekly feature hosted by That Artsy Reader Girl .  This Week's Topic: Hidden Gems ( which books haven’t been talked about as much or haven’t been marketed as strongly that you think deserve some recognition? ) Here's my list! I love these books!   My all time favorite. It's relatively well known but I never miss a chance to talk about it. I'm excited to read the second one that's coming out February 2019!    Another one of my all time favorites. Fantastic book!   Any of T.A.'s books, really. They are a delight!    Laugh out loud funny!     All of Kerry's books, not just this one!     Well written and addictive!   This who series is fantastic! The Ceruleans series.     Same deal here--I'm a big Cathy Lamb fan! Plus she's from Oregon like me! What are some "Hidden Gems" on your list? I'm excited to see others' lists on this one! Hap
7 comments
Read more

Hosted by Taking On A World of Words .      The Three Ws are:   What are you currently reading?   What did you recently finish reading?   What do you think you’ll read next?     Recently Finished     Was so disappointed by the August Reese Witherspoon book club pick. It started out with potential, but I just didn't care about or connect with any of the characters. To All the Boys I've Loved Before was delightful. I can't wait to watch the Netflix movie! Eleanor Oliphant is Completely Fine was absolutely fantastic. Quirky, relatable, honest. So, so good. I highly recommend it.   Currently Reading   JUST started this one. Have you read it?     Up Next     What are you reading this week? Happy Reading!
Post a Comment
Read more
More posts