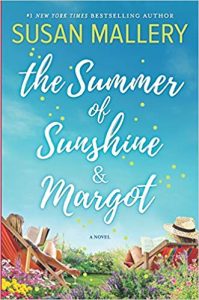 About The Summer of Sunshine and Margot

Hardcover: 368 pages
Publisher: HQN; Original edition (June 11, 2019)
The Baxter sisters come from a long line of women with disastrous luck in love. But this summer, Sunshine and Margot will turn disasters into destiny…
As an etiquette coach, Margot teaches her clients to fit in. But she’s never faced a client like Bianca, an aging movie star who gained fame—and notoriety—through a campaign of shock and awe. Schooling Bianca on the fine art of behaving like a proper diplomat’s wife requires intensive lessons, forcing Margot to move into the monastery turned mansion owned by the actress’s intensely private son. Like his incredible home, Alec’s stony exterior hides secret depths Margot would love to explore. But will he trust her enough to let her in?
Sunshine has always been the good-time sister, abandoning jobs to chase after guys who used her, then threw her away. No more. She refuses to be “that girl” again. This time, she’ll finish college, dedicate herself to her job as a nanny, and she 100 percent will not screw up her life again by falling for the wrong guy. Especially not the tempting single dad who also happens to be her boss.
Master storyteller Susan Mallery weaves threads of family drama, humor, romance and a wish-you-were-there setting into one of the most satisfying books of the year!

Alec glanced at the papers on his desk. They were arranged in neat piles, which Margot appreciated. How could anyone find anything on a messy desk? Her boss, a man whose desk was al- ways covered with folders and notes and half-eaten sandwiches, was forever sending her articles on how messy desks were a sign of creativity and intelligence, but Margot would not be swayed in her opinion. Disorder was just plain wrong.
“You know who my mother is?” Alec asked, his voice more resigned than curious.
Margot filed away the tone to review later. The dynamic between mother and son could be significant to her work.
“I do. Bianca Wray was born in 1960. Her father died when she was an infant and she was raised by her mother until she was twelve.” Margot frowned. “Why she was put in foster care isn’t clear, but that’s where she ended up.”
She f lashed Alec a smile. “She was literally discovered while drinking a milk shake with her girlfriends, propagating the myth that in Los Angeles anyone, at any moment, is just one lucky break away from being famous.”
“You’ve discovered my deepest wish in life,” Alec said drily.
“Mine, too,” Margot said, allowing her mouth to curve slightly at the corners. “After a career in modeling, your mother turned to acting. She preferred quirky roles to the obvious ingenue parts that would have helped her have a more successful career. She had one son—you—when she was twenty-four. She and your father, a Swiss banker, never married, but you were close to both your parents.”
As she spoke, she sensed tension in Alec’s shoulders as if he were uncomfortable with her reciting the facts of his personal life. He might not be her client, but he was her client’s son and therefore of note, she thought, but didn’t bother explaining her- self. Her methods were excellent and if he couldn’t see that, then this was not the job for her.
“Bianca is a free spirit, and despite facing her sixtieth birth- day, is still considered a beauty. She acts in the occasional project. From what I could see, there doesn’t seem to be a pattern in why she chooses the roles she does. She enjoys remodeling homes and has made a lot of money f lipping upscale houses. She gives generously to charity and has had many lovers in her life, but has never married. She is currently dating a man named Wesley Goswick-Chance. Mr. Goswick-Chance is the youngest son of an English earl. His parents divorced when he was an infant and he grew up in both England and the small European country of Cardigania. He is currently their senior attaché to the United States. He is stationed at the consulate here in Los Angeles.”
There was a lot more she could have mentioned about Alec’s mother. There was the time Bianca had been presenting at the Academy Awards and had dropped her dress on national tele- vision. Or her sex tapes that, back in the 1990s, had been quite the scandal, although they were fairly tame by today’s standards. Bianca was a colorful protestor, a woman who slept with kings, movie stars, artists and, according to some gossip that was never confirmed, had once had a torrid affair with the wife of the world’s largest yacht builder. While Margot would never admit it to anyone, she was equally intrigued and terrified by the idea of working with Bianca.
“That was very thorough,” Alec said with a sigh. “And thank you for not mentioning all the salacious bits I’m sure your research uncovered.”
Margot nodded. “Of course.”
He looked at her. His eyes were very nice—dark, with thick lashes. She could see traces of his mother in his appearance— the eyes she’d admired, the curve of his mouth.
“My mother has recently accepted a proposal of marriage,” Alec said, his voice stiff. “From Wesley. He’s a nice enough man and he makes her happy, so I have no objection to the union.” Margot waited quietly, not showing her surprise. How un- expected that, after sixty years and countless lovers, Bianca had
finally gotten engaged.
Alec’s gaze was steady. “If Wesley were a shipping magnate or a movie star, there wouldn’t be an issue. But he is a diplomat and as such, he moves in the kind of circles that will not be very accepting of my mother’s somewhat, ah, eccentric ways.”
“She wants to learn how to fit in.”
“Yes. To be clear, hiring you was her idea, not mine. I’m not pushing her into anything. She’s worried that her impulsive behavior will be a problem for Wesley and she claims she loves him enough to want to change for him.”
“What do you think?” Margot asked.
Alec hesitated, his gaze shifting from hers. “I believe most people are who they are. Asking Bianca to be a staid, polite and unobtrusive person is like asking the sun to shine less brightly. Ambitious, but unlikely.”
She’d wondered if he would say it was wrong for Wesley to not accept his fiancée as she was. Interesting that Alec had gone in a different direction. “You’re saying she can’t change.”
“I’m saying it’s improbable.” He returned his attention to her and leaned forward. “My mother is funny, charming and generous to a fault. I’m confident you will enjoy her company but if you take this job thinking you’re going to succeed, I’m concerned you’ll be very disappointed.”
Margot smiled. “You’re warning me off?”
“I’m suggesting you consider the possibility of failure.”
“Which only makes me want to take the job more, Alec, if for no other reason than to prove myself.”
“Not my intent, but I can see how it would happen.” 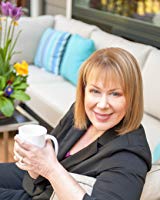