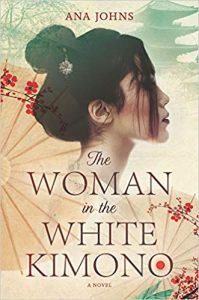 About The Woman in the White Kimono

Hardcover: 352 Pages
Publisher: Park Row; Original edition (May 28, 2019)
Oceans and decades apart, two women are inextricably bound by the secrets between them.
Japan, 1957. Seventeen-year-old Naoko Nakamura’s prearranged marriage to the son of her father’s business associate would secure her family’s status in their traditional Japanese community, but Naoko has fallen for another man—an American sailor, a gaijin—and to marry him would bring great shame upon her entire family. When it’s learned Naoko carries the sailor’s child, she’s cast out in disgrace and forced to make unimaginable choices with consequences that will ripple across generations.
America, present day. Tori Kovac, caring for her dying father, finds a letter containing a shocking revelation—one that calls into question everything she understood about him, her family and herself. Setting out to learn the truth behind the letter, Tori’s journey leads her halfway around the world to a remote seaside village in Japan, where she must confront the demons of the past to pave a way for redemption.
In breathtaking prose and inspired by true stories from a devastating and little-known era in Japanese and American history, The Woman in the White Kimono illuminates a searing portrait of one woman torn between her culture and her heart, and another woman on a journey to discover the true meaning of home.

I flew through this absolutely beautiful book! I was hooked literally from the first page, and finished the book in less than 48 hours. The story was told in two different time frames--late 1950's Japan and the present day America and Japan. I loved both story lines and their wonderful characters--Naoko and Tori. While it was clear from the beginning how the two stories intertwined, I couldn't stop reading to see how the story would unfold. The author's writing was beautiful, and the stories flowed well. This is Ana Johns' debut novel and I look forward to reading more from her in the future!

ANA JOHNS worked over twenty years in the creative arts field, as both a creative director and business owner, before turning her hand to fiction. Born and raised in metro Detroit, she now resides in Indianapolis with her family. The Woman in the White Kimono is her first novel.