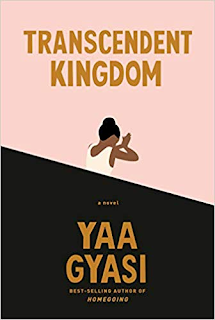 Source: Purchased through Book of the Month and ALC from Libro.fm

Gifty is a fifth-year candidate in neuroscience at Stanford School of Medicine studying reward-seeking behavior in mice and the neural circuits of depression and addiction. Her brother, Nana, was a gifted high school athlete who died of a heroin overdose after a knee injury left him hooked on OxyContin. Her suicidal mother is living in her bed. Gifty is determined to discover the scientific basis for the suffering she sees all around her.But even as she turns to the hard sciences to unlock the mystery of her family's loss, she finds herself hungering for her childhood faith and grappling with the evangelical church in which she was raised, whose promise of salvation remains as tantalizing as it is elusive. Transcendent Kingdom is a deeply moving portrait of a family of Ghanaian immigrants ravaged by depression and addiction and grief--a novel about faith, science, religion, love. Exquisitely written, emotionally searing, this is an exceptionally powerful follow-up to Gyasi's phenomenal debut.

I loved Homegoing (which I read for the first time just this year) and I was so excited to read Gyasi's latest novel!  I'm excited to say that Transcendent Kingdom is now on my all time favorites list--and definitely in my top favorite reads of 2020!  I've read a lot of reviews on this book saying they didn't love it because it jumps around a bit--which it absolutely does, but to me the format totally worked.  It pulled me in from the first chapter and kept me eagerly turning pages. I also received the ALC from Libro.fm, so I read this book while listening to the audio version (my new favorite thing!). It was narrated by my all time favorite narrator, Bahni Turpin, so it made this book even more enjoyable.
I think the reason I loved this book so much was because I completely related to the neuroscience aspect of the book, and the science vs. religion theme of the book.  My undergraduate degree was in psychology, and my favorite classes were biopsychology and neuroscience. I probably would've gone to graduate school in neuroscience or psychology if it didn't involve experimenting on mice at rats, as Gifty does in the book. If you're a psychology nerd like me, you will LOVE this book--so many neuroscience and psychology elements to the book. On top of how much I related to the book in that aspect, the writing, as expected, was absolutely phenomenal. This book was completely different than Homegoing, so if you're expecting something similar, it is definitely not. Both books are phemonemal though, and this one is absolutely one of my new all time favorites. A must read for sure!